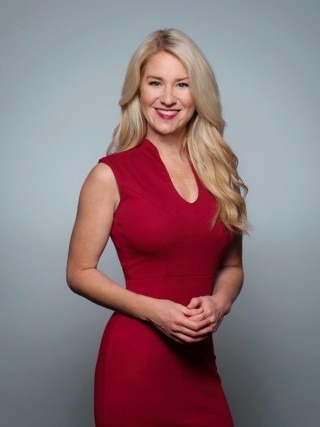 Jamie is from Panama City Beach, FL. She comes from a football family. Her father was a college football player at the University of Southern Mississippi and her mother was the captain of the cheerleading team there.

Her family moved to Panama City Beach to open up the first and only high school on the beach. Her dad was the head football coach, her mother was the first and only female athletic director in Bay County. Her brother was the starting quarterback who played for their dad, and her mother was her cheerleading coach. Jamie was the captain of the cheer, track and weightlifting team.

Jamie's dad went on to be a head football coach in the state of Florida for 30 years before retiring, and now has his own radio show on ESPN called "The Coach James Hale Show" on ESPN Panama City 104.3 FM.

Jamie went on and cheered four years at the University of Southern Mississippi and has a degree in Broadcast Communications. After college, she moved back to Panama City Beach to work at her hometown station where she became a sports anchor/reporter and news anchor. She spent five years at her first station before coming here to ABC 33/40.

In April 2018, Jamie was honored by winning the Florida Associated Press Broadcasters "Sportscaster of the Year" award.

This is Jamie's dream location and she is thrilled to be working in the heart of the SEC covering teams like Alabama and Auburn every week. She loves the passion that's here in sports and the people of this great city!