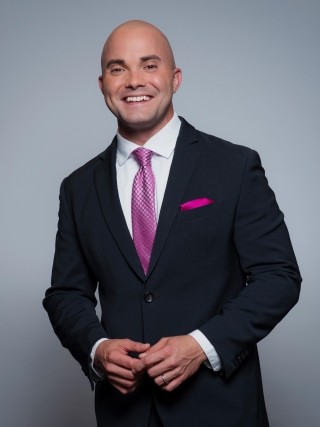 Stoney Sharp is a Morning Reporter for ABC 33/40's Good Morning Alabama. He has filled several roles during his decade-long television news career including anchor and entertainment TV host. Jimmy Fallon, Dolly Parton, Liam Hemsworth, and multiple other celebrities have graced his microphone.

He won an Associated Press award for Breaking Sports News after Lane Kiffin’s departure sparked a student-led riot at The University of Tennessee. Stoney has also snagged an Emmy nomination for his news reporting.

Before an 8-year stretch at WBIR-TV in Knoxville, Stoney’s TV career began in his hometown of Columbus, Mississippi at WCBI-TV. He is a graduate of The University of Alabama’s Department of Journalism & Creative Media.

Stoney has a passion for live breaking news and entertainment news. When he’s not at work, he’s most likely pumping iron in the gym. His favorite vacation spots are Seaside, Florida and Los Angeles, California.