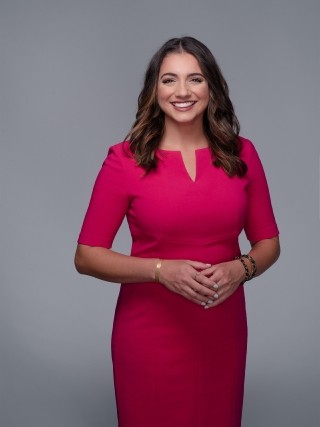 Taylor grew up fascinated with the weather. She was born in Plano, TX and raised in Georgia where she first decided to become a meteorologist in the third grade after a fear of storms turned into a passion for the weather.

Taylor attended the University of Georgia where she underwent rigorous academic training under some of the most intelligent meteorologists in the country. As well as being very involved in the local chapter of the American Meteorology Society, she graduated second in her class and was the first woman to obtain a B.S. in Atmospheric Sciences from the University of Georgia. Taylor also graduated with a B.S. in Geography.

During college, she interned at the top station in Atlanta. It was a summer of learning from some of the best veteran meteorologists in the business. After the internship, that station hired her as weather producer. She continued to work at the station for two years while finishing up her degrees and is extremely grateful and more well-rounded for the invaluable experience that she gained.

Upon graduating, Taylor accepted her first on-air TV job as the Chief Meteorologist at WDHN News in Dothan. While in Dothan, Taylor was able to expand her knowledge and skills forecasting tropical weather by beginning her career in the midst of the extremely active 2017 hurricane season.

After working in Dothan, Taylor moved to WKRG in Mobile to forecast alongside a team of very experienced and well-respected Meteorologists. Taylor learned a lot about tropical weather and tracked multiple Hurricanes, including Hurricane Michael, during her time along the Gulf Coast.

When not at work presenting the weather, Taylor is at home watching weather coverage or geeking out tracking storms on her computer, phone, etc. She enjoys golfing, exploring new places and loves her rescue cats Norman (named after the Storm Prediction Center location) and Sammie. Taylor also enjoys spending time with friends and loved ones.

She is very excited to continue her on-air career here in Birmingham and become part of the community. If you ever have a weather question or cool weather photo you can email her at: tmsarallo@sbgtv.com.